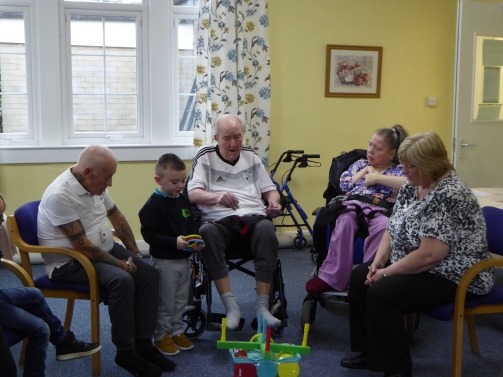 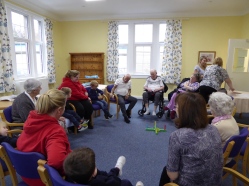 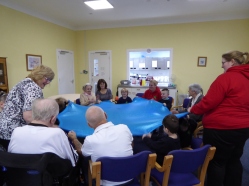 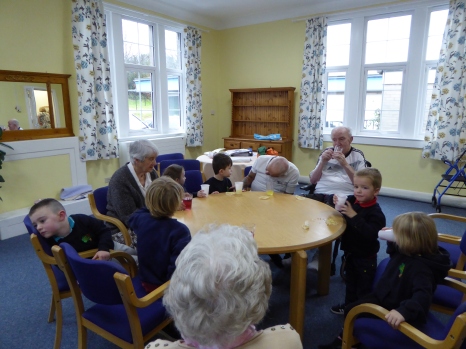 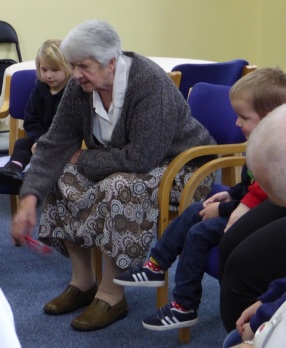 Sadie, a resident at Thomson Court Care Home in Bute, is playing hoopla, and is determined to score. Sitting on either side of her are some children from the local nursery, cheering her on: “Go Sadie!”

This was just a normal Wednesday afternoon at Thomson Court, where the residents had regular visits from the children at nearby Apple Tree Nursery.

Inspired by the example of a care home in Canada that had co-located a staff nursery to increase resident contact with children, Sheila Scott, who was the Unit Manager at the care home, wondered if there was the potential to do something similar at Thomson Court. Sheila had noticed that many residents in the home were not seeing their great-grandchildren on the mainland, and Appletree Nursery, where her daughter Stephanie works, is very proactive in working with the community.

Getting the ball rolling

The children first visited the care home in summer 2015, when they helped to paint the fence and planted sunflower and lettuce seeds. ‘Cameron’s Auntie Nan and her friend Sadie made sure that we painted it all,’ reads one of the quotations from the day. The initiative was such a success that it led to a regular programme of indoor and outdoor activities between the care home residents and the children.

The nursery staff compiled a floor plan with photographs and feedback from all their sessions, which map activities to health and wellbeing outcomes to demonstrate their beneficial impact.

Looking back over the years, it is inspiring to see the breadth and variety of activities that have taken place in the care home: ‘dooking’ for apples at Halloween, music and movement sessions, baking and biscuit decorating, puppets and nursery rhymes, and a raspberry tea, to name but a few. At Christmas the children made gifts for the residents and table mats for their Christmas dinner, and Santa came to visit them all. The children also made cards for the residents for Valentine’s Day and Mother’s Day, and there are plans for the residents to attend a concert at the nursery this Christmas.

The nursery also helped to raise money to pay for resources that support the residents’ wellbeing. They held a bake sale, which raised enough money to pay for a therapy doll for a resident who has dementia, and the children helped to choose the doll that was purchased. They also raised funds for a material cat and a pram, which are calming for residents.

Benefits for young and old alike

The nursery and care home staff observed that the intergenerational activities have had a positive impact on both the residents and the nursery children. Sheila commented that the Wednesday sessions provided a good break for residents in the afternoon. The residents were able to choose whether or not to attend, and one resident who initially was not interested in joining in the activities because he has a lot of family of his own living locally started to come along when he saw how much fun everyone was having! The daughter of one of the residents commented that the children ‘generally light the place up’, and that both the residents and the children loved it.

Lesley-Anne Lee, the nursery manager, observed that ‘our weekly visit to our Thomson friends has given the children new experiences and emotions’ and they appreciate that the residents were teaching the children ‘maybe without them realising’. She also commented that ‘the bond between the vast age differences is a joy to see.’

The nursery children forged close friendships with the residents, and one of the nursery pupils, Maisie, who is now at primary school, formed a particularly close bond with Barbara, and enjoyed painting her fingernails. ‘Barbara is my friend, she’s my best girl,’ she said, and her father observed that ‘Maisie loves Thomson Court.’ 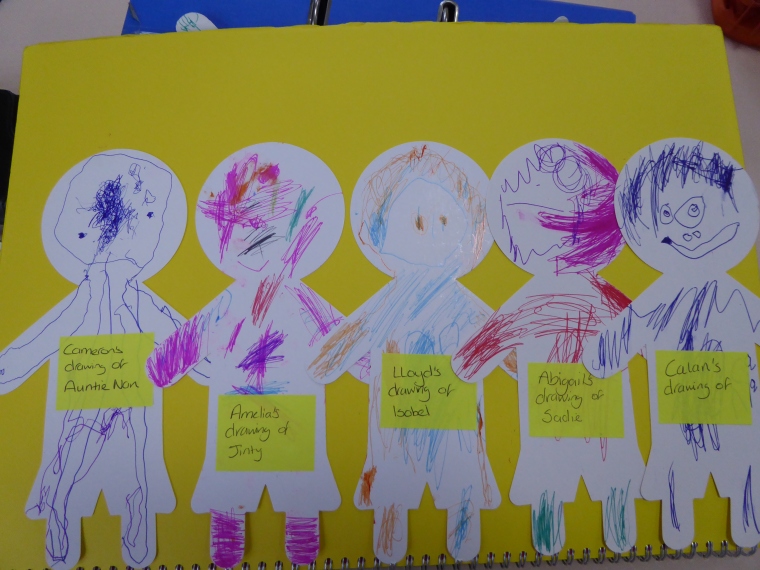 The regular visits made the children more aware of disabilities, and helped them to learn about the whole of life, including its end. The children visited one of the residents’ rooms to look at old photographs and learn about what her life was like when she was younger, and they also started a memory garden at the nursery to commemorate residents who had passed away.

Sheila observed that most of the residents have dementia, which affects their ability to communicate, and that the children helped to bring them out of their shell. One resident, who previously did not talk very much, became very animated when the children visited.

After an hour packed with games, and a break for cake and juice, it was time for the children to head back to the nursery school. ‘I want to stay at Thomson Court because it’s so much fun,’ pipes up one of the children. Thanks to the hard work and commitment of the staff at both the nursery and the care home, it was easy to understand why they did not want to leave.