Last week was Dyslexia Awareness Week. It also coincided with Occupational Therapy week. As an occupational therapist whose son is dyslexic it seemed fitting to share our journey so far.

Cian was born in October 2005 and I was incredibly proud as a mum when he took his first steps at 10 months and was walking by his first birthday. He talked quickly too and for those of you who know me that should come as no surprise!

He was a very active toddler who didn’t like to stand still for too long. He wasn’t interested in jigsaws or building bricks. He would prefer to drive tractors and play football. He was clever. He knew the various signs as we drove to and from nursery. He was able to tell you the numbers on the buses and where they went. All before starting school.

His transition report from preschool nursery to school was glowing. He had good pencil control, could recognise and write his name. There were no concerns.

Cian started primary school. One day a week I collected his friend from school. Often she would have her homework out and neatly finished before Cian had started. I noticed that despite being one of the youngest in the class she was coping better with the homework than Cian. People kept saying not to worry as often girls start quicker and boys aren’t interested at that stage. I don’t know how many times someone said he’s probably just a lazy boy!

With reading, Cian seemed to memorise the story and often used pictures to guess what was happening. At parent’s night in Primary 1 and 2 we discussed how things didn’t seem to click with writing. Cian was given a handwriting programme and we faithfully completed this as extra homework, even during the summer holidays. Despite this, his progress did not appear to equate with all the extra help.

Cian complained of headaches, sore stomachs and was diagnosed with childhood migraine. He also complained of fuzzy eyes and that the words jumped on the page.

We moved house and he moved schools. At this point we had Cian’s eyes tested as he couldn’t copy from the smart board. The optician found no issues with his eyesight.

Cian was increasingly distressed going to school. He felt he was getting in to trouble for not finishing his work quick enough and as a boy who wanted to do well this frustrated him. He said the classroom was noisy and he couldn’t concentrate on his work.

The school promoted independent writing and it was his responsibility to provide a written summary of his homework. Often his writing was illegible, there would be single words with no context and Cian could never remember what the instructions were.

After meeting with the school, Cian was referred to the educational psychologist. Unfortunately, as Cian was progressing at school he wasn’t a priority. He was keeping up with his school work and there were children with far greater needs than his. It took 5 months before a discussion took place between the teacher and the educational psychologist and Cian was referred to occupational therapy.

This was a turning point. Having lost almost half a year already I contacted the occupational therapy department, to be advised the wait was around 21 weeks. This meant that a full primary term would go by without a support plan in place.

I was able to discuss Cian’s challenges with the occupational therapist over the phone and an appointment became available earlier than expected. The therapist performed a thorough assessment of Cian’s physical function and cognitive abilities. It became apparent that Cian was good at compensating with every day activities but had marked visual perceptual difficulties and a tremor in both hands. His gross motor control was good but his fine motor control restricted.

During this time we made an appointment to attend Glasgow Caledonian University’s visual stress clinic to have Cian’s vision checked by an ophthalmologist.

The ophthalmologist assessment revealed Cian had difficulty with eye tracking in addition to the other visual perceptual difficulties highlighted by the occupational therapist. We were given a treatment programme and continue to have regular reviews.

The occupational therapist linked with the ophthalmologist and supported Cian and his teachers at school. Advice was given on seating arrangements in class so he could see the board and copy items more easily and he was provided with specialist pencil grips. The occupational therapist also worked on his fine motor skills and practical tasks like tying shoe laces and his school tie.

Cian’s vision improved with a period of home exercises from the visual stress clinic. The school were excellent and supported him with the programme there too.

Despite additional support for writing, phonics and an improvement in his visual perceptual tests. Cian’s progress with handwriting, spelling and reading did not reflect the huge amount of effort from him or from the school support. I began to wonder if he had dyslexia.

Following an educational psychology assessment I was advised that Cian did not fit the criteria for dyslexia as his reading age was not 2 years behind. I asked for a review of this as I felt we should be working to the Scottish Government definition of dyslexia:

Dyslexia can be described as a continuum of difficulties in learning to read, write and/or spell, which persist despite the provision of appropriate learning opportunities. These difficulties often do not reflect an individual’s cognitive abilities and may not be typical of performance in other areas.

The impact of dyslexia as a barrier to learning varies in degree according to the learning and teaching environment, as there are often associated difficulties such as:

Motor skills and co-ordination may also be affected.

In Primary 6 he was diagnosed with dyslexia.

Although this has been a lengthy process to get here, throughout the journey Cian’s school have been incredibly supportive. I think the occupational therapy input helped as they were able to highlight to the school that challenges that Cian faced when trying to learn. The ophthalmologist at Caledonian University has also kept the school informed throughout.

Cian is currently trying coloured overlays for Irlen Syndrome. Assistive technology helps him as he finds it hard to keep up due to the struggle with handwriting.

He uses his spell checker and calendar for reminders. He also puts notes on his phone. Unfortunately there is no funding for him to have a personal laptop or tablet to support his learning and we have been advised he couldn’t bring his own laptop to school for safety reasons. This is perhaps the biggest challenge he faces now as he is due to attend high school after the summer and needs to be able to keep up with the volume and pace of written work there.

Cian has most of the symptoms of dyslexia but despite all the challenges he is working well at school and progressing. He has recently taken up a weekly paper run and is coping well exchanging money and dealing with customers on his run. He has a very positive outlook and has been sharing his experience this week with the various primary classes at his school. I’m very proud of all he has achieved to date.

It may sound odd that I’m an occupational therapist yet hadn’t picked up on the issues. What I’ve learned about people with dyslexia is they are very clever. Cian has a high IQ. He also has great problem solving skills and often thinks outside the box. He was great at concealing his difficulties and played to his strengths.

I think the key was the formal assessment process and breaking down the components. Cian’s results were complex as he sailed through some assessments, the 90th percentile in some but the 1st percentile in others. There was no consistency here or at home.

When I saw his formal test results I realised how brilliant he actually was, and despite the marked difficulties he had, he was keeping up with peers in school.

As part of Dyslexia Awareness week we had an opportunity to attend a local support group run by Dyslexia Scotland. It struck me that there’s lots of parents and adults out there who haven’t been as lucky to have had the help and support that Cian has. I also wonder how we would have got on if I had no healthcare knowledge and didn’t know how to navigate the system.

It’s also made me think about the people I work with, both patients and partnerships. I learnt this week that 1 in 10 people live with dyslexia and from research a seemingly higher proportion of them work in health or social care. Common difficulties can be poor short-term memory (names, numbers), problems with time keeping, managing tasks, concentration and organisational skills, difficulty following instructions or sequences.

What Matters To Me 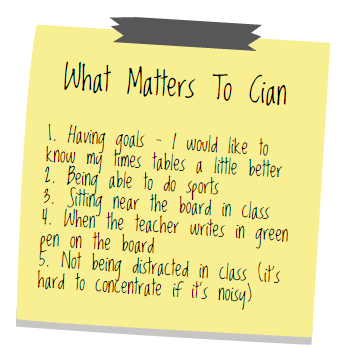 Thanks to Cian for allowing me to share his journey and to everyone who helps and supports Cian to live well with dyslexia.