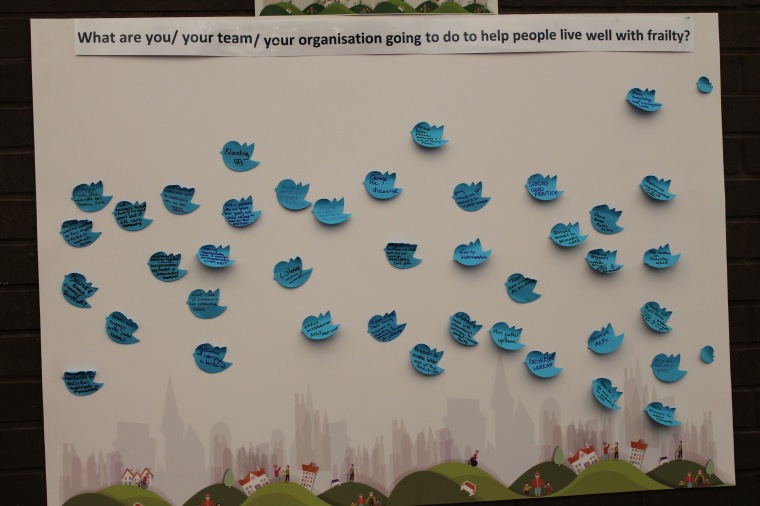 For Living Well in Later Life and Living Well with Frailty (25th and 26th October 2015) we were keen to have a strong presence and engagement on social media, and we were aware that in order to build momentum, we were going to have start this work well in advance.

Twitter is an invaluable tool for communicating with a broad range of audiences. However, there is a problem with information overload: it is a constant stream of real-time information and people don’t necessarily check every tweet on their timelines. As people are faced with a constant flow of tweets, it’s vitally important to ensure that your posts are engaging, and that you post at different times of the day to capture different audiences: it isn’t enough to post something once and hope that people will see it.

The beginnings of a plan

We knew that we would have to tweet our messages multiple times to capture as large an audience as possible. However, we also knew that it wouldn’t be enough to simply keep reposting the same tweet again and again.

We gave careful thought to the different reasons why people would want to attend our events and incorporated different hooks, such as questions, in our tweets to attract attention and start building hype around the events. We also included pictures and relevant hashtags wherever possible to increase the visibility of our tweets and encourage retweets.

Scheduling was very important: we wanted to ensure that we were tweeting when our followers were most likely to see our posts, so we used Tweriod to find out when the majority of our followers were online and planned our activity accordingly.

It is useful to be able to tap into people’s personal networks, so in the two working days prior to the event we planned tweets to promote the plenary sessions and workshops from each event which incorporated speakers’ Twitter handles to encourage them to retweet these posts to their own networks.

Putting it into action

We used the QI Hub Twitter account, rather than the newly-established Living Well in Communities  project account to post these tweets, as we wanted to share our messages with as large an audience as possible, and it made sense to use an account which already had a large and varied follower base.

We used Hootsuite to schedule our planned tweets, as it allowed us to save time by lining up multiple tweets at the same time. It also meant that we could schedule tweets in the evening and at weekends when we weren’t in the office. We were also able to edit tweets that were scheduled when speakers got back in touch with us to let us know their Twitter handles.

Our team set up a dedicated Twitter pod at the venue to encourage delegates to make pledges on how they were planning to improve outcomes for older people and those living with frailty. We used the event to launch our new Living Well in Communities Twitter account, and we kept up the momentum from our promotional campaign by tweeting highlights from the plenary sessions and workshops with photos and retweeting posts from speakers and delegates. This steady stream of activity allowed people who were unable to attend to follow the discussions.

Our promotional tweets were retweeted a number of times in the run up to the events and the new Living Well in Communities Twitter account gained 20 new followers over the course of the events.

It is clear that our promotional work in the run up to the events and the tweeting on the day really increased our reach.

We’re now promoting the outputs from the events by tweeting at key influencers to encourage them to share our resources. You can view videos, Storifys, Padlets and other materials from the events on our Living Well in Later Life and Living Well with Frailty blog posts. The resources are also available from our community site.